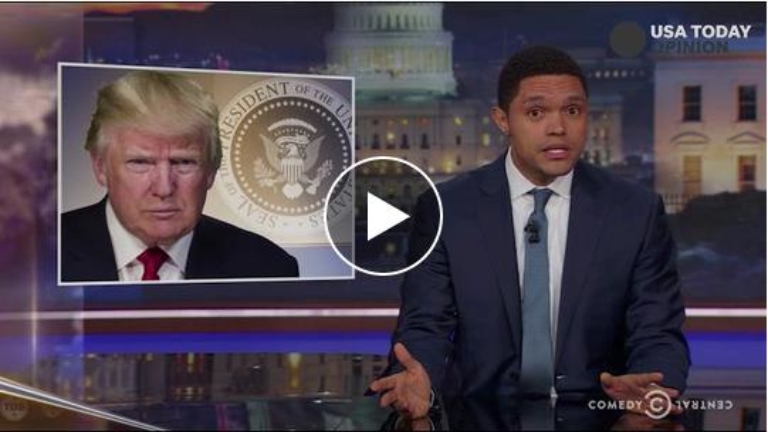 You could practically hear writers on the late-shows hitting their delete buttons Thursday afternoon as they scrapped their planned monologues to make room for new jokes after learning of a White House immigration policy meeting in which President Trump reportedly asked, “Why are we having all these people from shithole countries (such as Haiti, El Salvador and African nations) come here?”

Trump has since responded, denying the use of the vulgar term to describe those countries, saying he used tough language but “that was not the language used.”

“All week long, President Trump has tried desperately to convince us that he is a stable, steady leader,” Colbert noted in his opening monologue. “He took questions, opened up a meeting to the press, met with foreign dignitaries. It was a nice act. But like many men his age, he can only keep it up for so long. Today he returned to the same unstable, reactionary president we’ve all come to know … and know.”

“I’m sure the fact that countries he described as shitholes are mostly populated by people of color and the immigrants he wants from Norway are not is a coincidence,” Kimmel assured his audience after they booed Trump’s comments. “Because if it wasn’t, it would mean we voted for a racist. Like a real one and we’d have to get pitchforks and chase him out of the White House. But I also assumed the White House would deny he said that. They did not. They just tried to spin it.”

He continued, “It’s just unfathomable. You just can’t believe that this is the guy running our country. The only silver lining — and it’s a small silver lining — is we got to say Wolf Blitzer say ‘s-hole’ all day.” (The CNN host censored himself when repeating the remark.)

Noah revealed that he had been planning to talk about how South Korea had credited Trump’s sharp rhetoric in getting North Korea to the negotiating table.

“And I was going to be like, ‘Wow, Donald Trump, it looks like you did something right.’ I swear, that’s what we were gonna do. Then he did something Trump.”

After showing a clip of CNN’s Jake Tapper repeating Trump’s comment, Noah commented, “Personally, as someone from South Shithole, I’m offended, Mr. President. Because he not only thinks brown countries are shitholes; he thinks we’re never gonna know what he said? Don’t get me wrong: It might take a few weeks but as soon as the news donkey reaches our village, we’ll be so mad!”

He continued, “I know everyone’s focusing on him calling countries shitholes and I’m like, whatever, say what you want, but you know what part really put it over the line for me? Norway. When he said where he wanted immigrants to come from. He didn’t just name a white country. He named the whitest country. He didn’t even go with a more subtle country that might leave it up in the air like, ‘We need to let in more people from Portugal.’ No, he goes with Norway. People so white they wear moonscreen — that’s how white they are.”

“It’s almost like yesterday, when Trump met with the prime minister of Norway, he asked, ‘What do you guys do with your black people?’ and she was like, ‘Oh, we don’t have any,’ and he was like, ‘Wowwww.’ ”

Meyers floated a rather charitable idea: “To be fair, maybe Trump meant it as a compliment. After all, Trump does all his best tweets when he’s sitting on the shithole.”

Read the original post by Jayme Deerwester on www.usatoday.com with interesting video clips.